After the station turns hostile and the crew is forced to blow it up, the last shot of the episode shows the station to start repairs on itself, implying that the station was not destroyed. 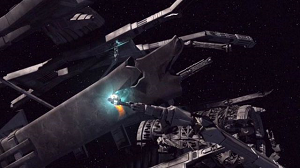 Ah, I perceive that you have met the Ware before.”
“The Ware?”
“Automated facilities such as this,” Rethne clarified. “My people, the Menaik, have only mastered the warping of space less than my lifetime ago, but we have encountered several such stations, and met others who tell us of more. It is they who name them Ware.”
Reed and Mayweather exchanged a look. “They told you about these stations—but not about the danger?” the captain asked.
Captain Rethne leaned forward. “Danger? The Ware stations are eminently useful! Repairs, supplies, services, a haven for weary travelers, all these things they provide.”
“But at a steep price,” Mayweather put in.
The Menaik turned to face him. “Greetings extended. You also speak for Pioneer?”
“This is my first officer, Commander Travis Mayweather,” Reed explained.
“Thank you, Captain. Yes, Commander, the Ware stations drive hard bargains for their services, but they are more than worth the price.”
“The price is a lot higher than you think,” Mayweather said with feeling, stepping closer to the screen. “Tell me: Have you lost any members of your crew at one of these stations?” Rethne’s head lowered. “On this visit, we have not. But six weeks ago, on our last visit here, a passenger went where she should not have been. Ground-dwellers do not understand the hazards of space, and sometimes make fatal errors. Still, the fault is mine for not tending my charge more carefully.”
Mayweather spoke urgently. “Captain . . . that passenger is probably still alive, and still on the station.”
Rethne shot upright, all four arms extended in shock. “How can this be? Her body has already been returned to TeMenaik and consecrated to the Core of Creation.”
“I’m sorry to tell you this, Captain, but that wasn’t her body.”
“You know that the Ware stations can create perfect replicas of any organic or inorganic matter, correct?” Reed put in.
“This is so. It is what makes them so enormously useful.”
Mayweather resumed the narrative at Reed’s nod. “Over a dozen years ago, Captain Reed and I served on a ship called Enterprise. We came across one of these stations when we needed repairs. While we were there . . . I was abducted. I was beamed aboard the station and replaced by an exact replica of my own body—exact, but dead. At first, my crewmates thought I’d been killed by an energy discharge during the repairs. But our ship’s doctor had recently inoculated me with a kind of microbe that should’ve thrived on that kind of energy, except that all the microbes he found in the duplicate body were dead. He realized the station’s replicating mechanism had created an exact double to make my crew think I was dead.”
“Why would it do this?”