Gilly was crying. "Me and the babe. Please. I'll be your wife, like I was Craster's. Please, ser crow. He's a boy, just like Nella said he'd be. If you don't take him, they will."
"They?" said Sam, and the raven cocked its black head and echoed, "They. They. They."
"The boy's brothers," said the old woman to the left. "Craster's sons. The white cold's rising out there, crow. I can feel it in my bones. These poor old bones don't lie. They'll be here soon, the sons."

Become White Walkers. A White Walker brings one of the boys to a ritual attended by several other Walkers. There, one of them holds a finger up to the boy and we see the boy's eyes turn blue, just like the Walkers. 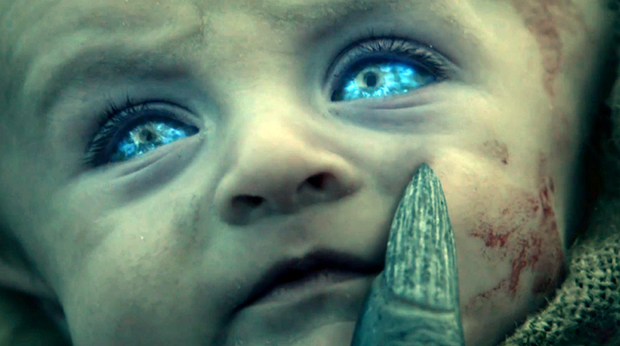 "That's pretty." He remembered Sansa telling him once that he should say that whenever a lady told him her name. He could not help the girl, but perhaps the courtesy would please her. "Is it Craster who frightens you, Gilly?"

"For the baby, not for me. If it's a girl, that's not so bad, she'll grow a few years and he'll marry her. But Nella says it's to be a boy, and she's had six and knows these things. He gives the boys to the gods. Come the white cold, he does, and of late it comes more often. That's why he started giving them sheep, even though he has a taste for mutton. Only now the sheep's gone too. Next it will be dogs, till . . ." She lowered her eyes and stroked her belly.

"What gods?" Jon was remembering that they'd seen no boys in Craster's Keep, nor men either, save Craster himself.

"The cold gods," she said. "The ones in the night. The white shadows."

And suddenly Jon was back in the Lord Commander's Tower again. A severed hand was climbing his calf and when he pried it off with the point of his longsword, it lay writhing, fingers opening and closing. The dead man rose to his feet, blue eyes shining in that gashed and swollen face. Ropes of torn flesh hung from the great wound in his belly, yet there was no blood.

"What color are their eyes?" he asked her.

"Blue. As bright as blue stars, and as cold."

She has seen them, he thought. Craster lied.
ACOK - Jon III

In half a hundred ways. "He gives his sons to the wood."

"Smallwood told me. Long ago. All the rangers know, though few will talk of it."

"Did my uncle know?"

"All the rangers," Mormont repeated. "You think I ought to stop him. Kill him if need be." The Old Bear sighed. "Were it only that he wished to rid himself of some mouths, I'd gladly send Yoren or Conwys to collect the boys. We could raise them to the black and the Watch would be that much the stronger. But the wildlings serve crueler gods than you or I. These boys are Craster's offerings. His prayers, if you will."
ACOK - Jon III

"We've had no such troubles here . . . and I'll thank you not to tell such evil tales under my roof. I'm a godly man, and the gods keep me safe. If wights come walking, I'll know how to send them back to their graves. Though I could use me a sharp new axe." He sent his wife scurrying with a slap on her leg and a shout of "More beer, and be quick about it."
ACOK - Jon III

There had been no attacks while they had been at Craster's, neither wights nor Others. Nor would there be, Craster said. "A godly man got no cause to fear such. I said as much to that Mance Rayder once, when he come sniffing round. He never listened, no more'n you crows with your swords and your bloody fires. That won't help you none when the white cold comes. Only the gods will help you then. You best get right with the gods."

Gilly had spoken of the white cold as well, and she'd told them what sort of offerings Craster made to his gods. Sam had wanted to kill him when he heard. There are no laws beyond the Wall, he reminded himself, and Craster's a friend to the Watch.
ASOS- Samwell II